What happens in divorce if you commit adultery?

The federal Divorce Act governs what happens in divorce cases in Ontario. If you’re applying for a divorce on the basis of adultery or an ‘affair’, this is one of the grounds where one party is deemed to be ‘at fault’ in the breakdown of the marriage.

This may or may not have implications depending on your personal circumstances and you might want to consider these before making a decision on the reason for divorce on your application. 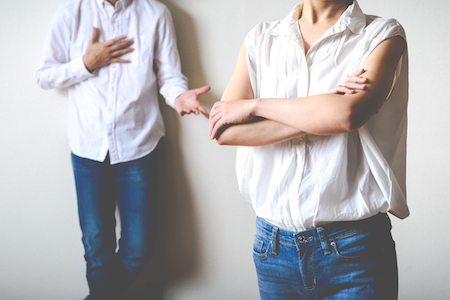 What is an ‘At-Fault’ Divorce?

Mistakenly there is sometimes the belief that there are many grounds for divorce. There is actually only one ground on which a divorce will be granted – the breakdown of a marriage and this may be proven in three different ways.

‘At fault’ divorces include;

‘No fault’ divorce is;

What are the Implications of Filing for Divorce on the Grounds of Adultery?

The first implication is with regards to timing. If you file the divorce for either of the ‘at fault’ reasons, you can do so without having to wait to be separated for a year, so in this respect, if the divorce petition is uncontested by the other party, you might be able to finalize a divorce more quickly.

In the case of any divorce however, you will legally have to wait 31 days after the divorce was granted before it takes effect so you will not be able to remarry until after this time period at which point you can get a divorce certificate as legal proof of the dissolution of the marriage.

If however, you file on the grounds of adultery and the divorce is contested by the other party, this is where matters become a little more complex and you will usually need to consult a divorce lawyer to represent you in court. The reason for this is that the adultery has to be proved by the petitioning spouse.

How do you Prove Adultery in a Divorce?

The court has to be satisfied that the adultery took place. Either the accused spouse needs to admit it took place, the third party with whom they had the affair gives evidence admitting to the affair, or the spouse bringing forth the divorce has to provide convincing evidence which leads the judge to the reasonable conclusion that the adultery did in fact take place.

This is not to say that the cheating spouse has to be caught red-handed or that there needs to be physical evidence of an extra-marital affair, but when all the facts and circumstances are considered, the court needs to agree that it did happen.

Although you will not have to be separated for a year before filing for divorce on the basis of adultery, if things become drawn out in court, it can take a long time and be very costly to resolve if there isn’t sufficient evidence to prove an affair. Be mindful that it’s not enough to merely suspect your spouse of an affair, nor will it be accepted just because they had the ‘opportunity’ to cheat.

Being awarded a divorce based on adultery will not entitle you to a greater amount of spousal or child support and conversely, if you’re the one whose infidelity ended the marriage, you won’t need to pay any more either. It usually won’t have any bearing on the custody of any children involved, unless the past behavior of the cheating spouse is relevant to their ability to parent the children.

Notwithstanding the legal aspects and financial and time burden of proving adultery, generally, couples in a contested adultery divorce spend a lot of time and energy embroiled in proving or disproving claims and this is no doubt detrimental to the wellbeing of themselves and any children. Keep in mind that the party with whom the adultery occurred will become a party to the divorce case and have an opportunity to defend themselves of the accusation as well.

If you need some help to determine what reason should be cited on your divorce application or you’re unsure as to whether you have enough circumstantial evidence to prove adultery, one of our professional divorce lawyers would be happy to help you in a free consultation.