Back to Team Overview 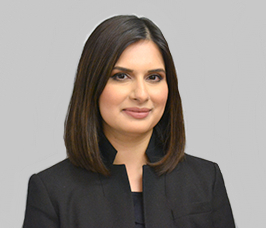 Senior Counsel to the Firm

Mahvish obtained her Bachelor of Arts degree in Psychology from York University in 2004. She immediately went on to obtain her Bachelor of Laws degree from Osgoode Hall Law School in 2007.

Mahvish Mian articled with the Department of Justice (DOJ) and the Public Prosecution Service of Canada. Subsequent to being called to the Bar of Ontario in 2008, she continued to work for the PPSC as Crown Counsel. While at PPSC, Mahvish completed a secondment with the Tax Law Services Section of the DOJ.

Mahvish realized her passion for family law later on in her career when she joined the firm of Wood Gold LLP in 2011. In that role, she dealt with all aspects of family law, including custody/access, spousal/child support, property division and separation agreements. She represented clients at both the Ontario Court of Justice and Superior Court of Justice. In 2014, Mahvish obtained a Certificate in Family Mediation from York University and is, currently, working toward gaining accreditation as a family mediator. Mahvish takes her interest in mediation into the community as well by volunteering as a mediator on three separate rosters in Toronto and Durham Region, including the Office of the Independent Police Review Director.

Mahvish’s experience as a skilled advocate combined with her tactful approach as a mediator makes her ideal for resolving complex litigation matters. She believes in garnering the best possible result for her clients in the most efficient manner. Mahvish is compassionate and highly personable, which creates an environment where her clients feel comfortable to tell their story.

Mahvish Mian has the ability to serve clients in Urdu, Hindi or Punjabi.